# Object Detection based on Deep Learning

# What is object detection?

In recent years, object detection in images has been greatly improved through numerous implementations of the Deep Learning paradigm. Creating trainable models helps to rapidly detect and classify discriminating features without having to develop a sophisticated algorithm. In fact, detecting objects and locating them in an image is an increasingly vital aspect of computer vision research. This discipline seeks out instances, their class labels and their positions in the visual data. This domain stands at the overlap of two other fields: image classification and object localization. Indeed, object detection is based on the following principle: for a specific image, we look for regions of the image that might contain an object and then, for each of these detected regions, we extract and classify it using an image classification model. Those regions of the initial image showing good classification results are maintained and the remainder is discarded. Thus, for a good object detection method, it is necessary to have a robust region detection algorithm as well as a good image classification model.

The following projects and tutorials related to the video detection task are provided for further details:

The following are some useful books that will help you learn the different aspects of object detection:

Object detection consists of identifying and locating one or several objects in the image. Depending on a given input, a detector will return information of two dimensions: the class labels and location of each instance. Locating an object in an image is complex and measuring the localization performance needs an adapted metric. Moreover, unlike classification, several targets can be located in the same image and the detector must be able to accurately locate them. For a single input, an object detector returns the detected objects in the image and their associated bounding boxes. Some strategies are available to address this challenge. The first one(see Figure 1), based on object recognition approaches, essentially consists of simply predicting the size of a bounding box and the class to which it belongs. The second approach (see Figure 2), probably the best known, is the proposed region approach where another model extracts a reduced number of candidate frames (i.e. proposals) that contain an object and the problem is then simplified into a recognition problem.

Figure 1: Object detection based on a single-stage method

Figure 2: Object detection based on a two-stages method (region proposals)

cIn this section, we will discuss different methods of contour detection and compare them with each other.

The Sobel detector is one of the methods we're looking at right now. Like most detectors, this one is based on calculating the gradients of the image at each point. Sobel's discrete method is based on multiplying the intensity matrix around the desired pixel by the following matrices, representing the " mixture " between filters derived according to x and y, and Gaussian filters that add importance to the nearest pixels.

An alternative method that has been explored is the use of the Laplacian. The principle is quite similar and is based on the second derivative of the intensity. Discretely, the Laplacian matrix is implemented by the product of the intensity matrices of the pixel contour with the following matrices :

The Canny method uses a Gaussian filter and then derivation matrices along both axes to determine the magnitude and angle of the gradient. Finally, a hysteresis is applied to smooth out the most important edges.

This detector is pretty close to Sobel's. Concretely, it operates on the principle of gradient detection along the two major axes, in combination with an averaging filter.

# Conventional methods for object detection: A use case

The objective of this use case is to develop and program algorithms to detect faces in images. To do this, one approach using Viola-Jones' algorithm (opens new window) will be tested. The Viola-Jones technique (Haar Cascade Face Detector) is a method of detecting objects in images proposed by Paul Viola and Michael Jones in 2001 and widely used for face detection. This method detects objects by learning a classifier.

The implementation of this detector is as follows:

The method is implemented with Opencv's haar cascade. We tested a few different parameters for this detector. Finally, we get an optimal result (see Figure) with a slight scaling of the image (10%), a minimum detection size of 30 pixels by 30 pixels and a minimum number of neighbors for the detection to be valid of 5. 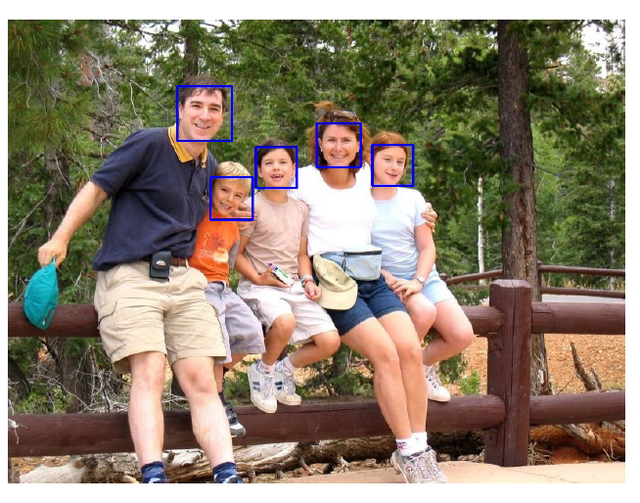 Convolutional neural networks (CNN) are particular deep neural network (DNN) structures since the basic operation has become a convolution rather than a matrix multiplication. These networks have been developed to take advantage of big data with a structure (spatial, temporal, ...) such as images, videos, etc. As shown in Figure 3, their functioning is straightforward and requires some convolution operations. The output is obtained by convolving the input image by a fixed number of kernels. The output of a kernel is obtained by multiplying the current position of a sliding window (i.e. receptive field) applied to the image. Besides, pooling or subsampling layers are added to the basic operations. They allow to reduce the spatial size of the representation in this way, they allow controlling overfitting problems.

Figure 3: A basic structure of CNN

The CNN implementation is as follows:

Source code to learn the model:

The following pseudo-code entails a function to calculate the overlap rate taking into account the ground truth boxes and the predicted bounding boxes.

The objective of this use case is to explain the real-time object detection and segmentation by an example. To do this, we will develop a real-time segmentation application with a simple webcam. We will use the Tensorflow framework (opens new window), the Mask RCNN network learned with the COCO dataset; which allows us to detect up to 100 different types of objects.

First of all, let's make a list of our tools and libraries to install.

In order to check if your computer is ready, open a python3 console in the terminal by typing python3. Do the following imports:

To make the model work, you need to load the network and its weights. You will find a list of all object detection models available with Tensorflow on this zoo model. For this tutorial, download mask_rcnn_resnet101_atrous_coco.

We start with the last point: initialize the webcam. This allows two things: (1) to create the video stream and (2) to get the width and height of a frame of the stream in order to configure the output tensor of the mask.

The next step is to import the label_map file. It is done using methods delivered with Tensorflow's object_detection.

We then proceed with the import of the model and the collection of the tensors.

Let's continue our program with the main method. In this method which is called after the initializations we just presented, we capture the last image of the webcam, we process it, we display the modified image and we start again. So the main method works like this:

And so the core of the program is in the detect_objects() method which takes as arguments the image (in NumPy array format) and the Tensorflow session which will allow us to run our model.