# What are Artificial Intelligence, Machine Learning, and Deep Learning?

The objective of the AI field is to create intelligent agents, which can have a perception of the real world through sensors, make decisions thanks to their "intelligence", and finally implement them through actuators. If you want to make an analogy with a human being, you can think of sensors as the sense organs (eyes, ears,...), the intelligence is that of our brain and the actuators can be the hands, feet, or more generally the muscles.

However, the biological analogy is limited (opens new window), since it is not necessary for the sensors of an agent to detect physical phenomena, such as temperature or time, but it could detect data, relations, or inputs of any other kind.

Machine learning is generally considered as a subset of the AI field. Specifically, the term Machine Learning means the science of programming a machine so that it can learn to perform a task from the data, rather than through programming.

Deep Learning is a further subset of the Machine Learning field, more precisely an ensemble of techniques and algorithms that exploit neural networks for the solution of problems such as Computer Vision or Natural Language Understanding.

More specifically, Virgilio will provide you with guides to become experienced in the Machine Learning field, with a strong focus on Deep Learning techniques.

A more engineering definition of Machine Learning is that given by Tom Mitchell: "A machine is learning from experience E with respect to task T and a metric of P, if its performance on T, measured with P, improves with experience E."

This theoretical definition may be difficult to distinguish in practice, but it becomes more evident with an example, such as the autonomous driving system of a new generation car.

An autonomous car, in fact, can be considered as a whole an Artificial Intelligence system: it collects data from the real world (road, cars, road signs, speed) through sensors, possesses a set of "rules" of behavior that constitutes its intelligence ("if you are about to collide with an object, brake preventively") and a set of actuators implementing relative decisions (brakes, steering, ABS).

In this example, the AI system of the car has a sub-module of Machine Learning that allows it to improve over time, as the car "sees" different roads and situations, and increases its performance compared to some metric (safety, reaction time to braking, consumption).

Additional sub-modules can use Deep Learning techniques such as neural networks, trained to recognize the route of the road, the shapes of cars, distinguish them from those of trees and pedestrians, and so on.

# Differences from the algorithmic approach 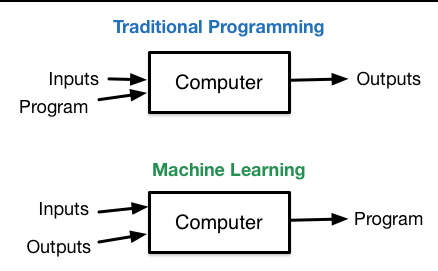 In computer science, the classic approach to the problem consists in designing a process (algorithm) that is then realized in a programming language (implementation), thus solving the problem in a deterministic fashion. It is important to note that there is no need for input data examples to produce the output considered correct.

This determinism implies the possibility to understand which action is taken at each step and why.

It is important to note that there is no need for input data examples to produce the output considered correct.

The approach of Machine Learning, at an intuitive level, consists instead in "seeing" a lot of input examples, each matched with the output considered correct, and programming the machine to detect the recurring patterns that occur in the data.

These patterns will then be used by the machine as "knowledge", to try to return the correct output, if a new input is provided (never seen before).

The process of feeding with data is called training and its result is a model (a set of parameters properly "adjusted" so that they recognize the patterns that interest us for the given problem).

Once a model is obtained, it can be used to predict the correct output to inputs that it has never "seen".

For a model, to be effective, it's crucial the ability to generalize to examples that it has never seen, otherwise it will work only after having being trained on all possible data!

Let's see some practical examples of how Machine Learning is applied in the real world.

It is an application of Machine Learning:

We also see some counter-examples.

It is not a Machine Learning application:

# Why to use Machine Learning techniques

Imagine having to create a spam email filter with traditional programming techniques:

It's easy to see the program would very soon become a vast set of complex "hard-coded" rules, chaotic and complicated to maintain, needed to be added manually as new approaches to fool it will be used.

Instead, a spam filter consisting of a Machine Learning model would automatically learn which sentences, words, and patterns are valid indicators of spam danger and could be updated every time an email is recognized as a new type of spam. The program is much shorter, easy to maintain, and accurate in recognition.

In summary, Machine Learning techniques are appropriate for:

Now you should be more comfortable with high-level ideas of the concepts of AI and ML, and every time you see a term you'll know how to contextualize it.

You will also see how the terms are crippled and misused, and maybe you could recommend this guide to the next person to clarify his ideas!

In the next guide you will learn what do you need in order to start your Machine Learning journey!

← What is Virgilio? What do I need to do Machine Learning? →